It all started with a crazy idea at the ETH (Swiss Federal Institute of Technology) Zurich. What if the burning of fuels could be reversed? The idea worked – first on paper, then in the lab and finally under real conditions. A synthetic fuel was born that could in principle be produced from water and CO2 in any sunny spot in the world and replace any fuel from crude oil to methanol. And in the end, the CO2-neutral fuel miracle should be even less expensive to buy than its fossil predecessors. Too good to be true – or a real opportunity for the future?

The idea of reversing CO2 emissions has been around since the 1980s. After years of research, in 2014 ETH Zurich succeeded in producing paraffin from CO2 under laboratory conditions for the first time in the world. In 2016, the ETH spin-off Synhelion was founded with the aim of bringing this technology to market. And apparently Zurich Airport Company considers the process so promising that in May 2020, it committed to purchase the entire production volume of a planned plant at cost price. What is behind this?

“Zurich Airport approached us because they saw a promising opportunity in our technology to reduce their carbon footprint,” said Synhelion CEO Dr. Gianluca Ambrosetti. 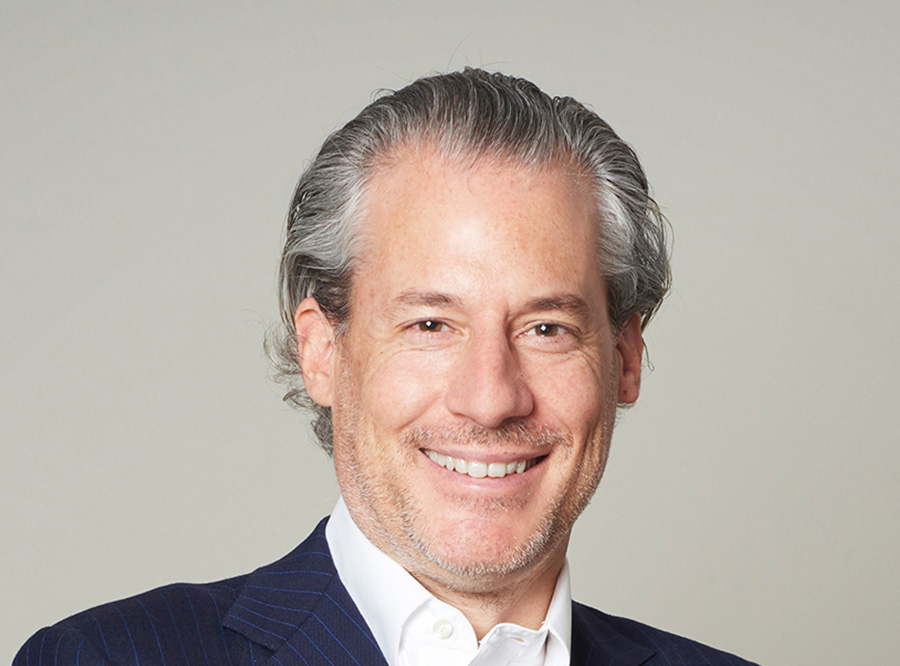 "Our synthetic fuels are compatible with common combustion engines and aircraft turbines. So the existing infrastructure can continue to be used," Dr. Gianluca Ambrosetti, CEO of Synhelion

CO2-neutral aviation fuel is currently the only chance to continue air travel in a more climate-friendly way, explains Murer, Synhelion‘s communications manager. Compared to other energy sources, liquid fuels have an extremely high energy density. The plane has on board the approximately 100 tonnes of paraffin needed for a flight from Germany to Singapore, for example. About a third of the take-off weight, that is feasible – the battery of a comparable electric drive, on the other hand, would be so heavy at the current stage of development that the aircraft could not take off at all.

And from Synhelion’s point of view, there is another weighty reason for synthetic aviation fuel. “Our synthetic fuels are compatible with common combustion engines and aircraft turbines. So the existing infrastructure can continue to be used,” said Dr. Ambrosetti. “On average, an airliner is in operation for 30 years,” explained Murer. “This means that even if the technology existed now to produce electric aircraft, for example, there would still be conventional aircraft flying until 2050. Even if only such aircraft were built and purchased from now on, the others would still be in operation for far too long to reduce CO2 emissions in time. And it’s not just about the aircraft, but also about the refineries, the distribution, the fueling infrastructure, etc. There’s a huge apparatus behind it.”

In terms of global warming, the use of non-fossil raw materials and energy sources is, of course, crucial in the production of synthetic fuels. Simply put, Synhelion produces fuel from sunlight and air. And in a little more detail?

“When a fuel is burnt, CO2, water vapor and heat are produced,” said Murer. “This heat is then used to propel a car forward, for example. We reverse this process, i.e., we take CO2 and water, heat it with concentrated sunlight and convert it into synthesis gas. And that is like the universal key from which you can make any fuel. We then produce something like a synthetic crude oil from which petrol or even paraffin can be made.”

The concentration of sunlight is also well known – there is the childhood trick with the burning glass, in the next larger variant the parabolic mirror and finally facilities like the one at the DLR Institute for Solar Research and Solar Power Plant Technology in Jülich. There, 2000 movable mirrors direct the sun’s rays onto the top of a 60-meter high Solar tower. 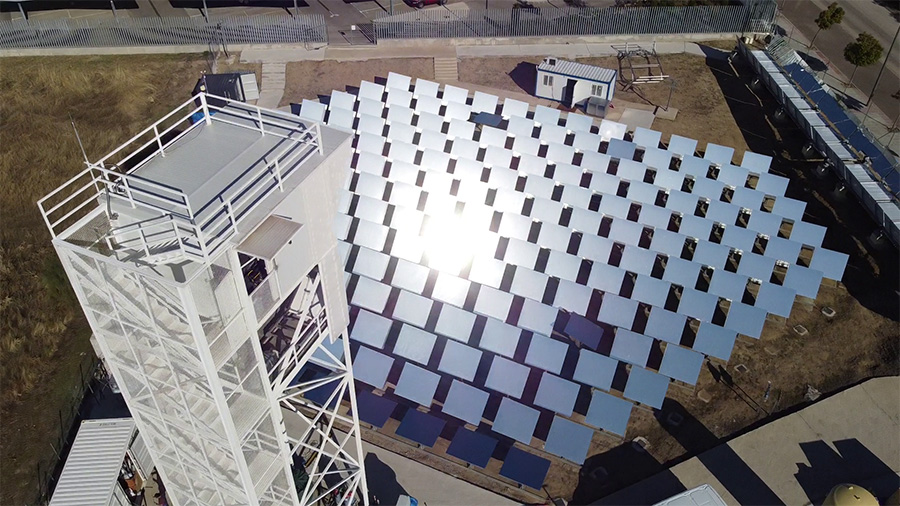 Here, for example, Synhelion is testing its technology on an increasingly large scale. “There are already various solar thermal power plants around the world that drive a steam turbine to produce sustainable electricity,” said Murer. While a turbine picks up speed with steam as hot as a few hundred degrees, the production of synthesis gas requires much higher process temperatures that were previously only achievable with fossil energy. Synhelion now seems to be able to achieve such temperatures with solar technology with its innovative process. 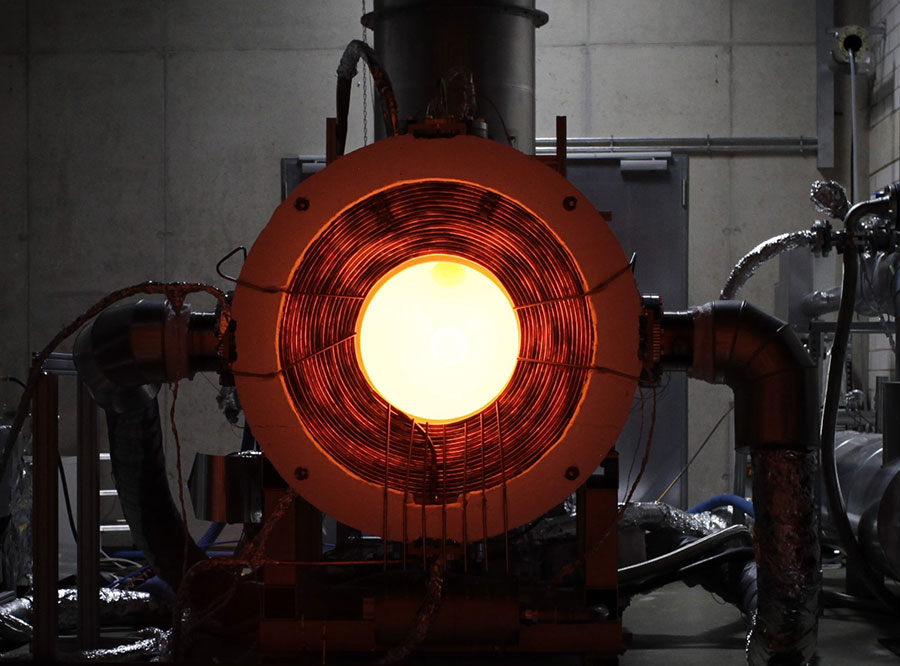 “Our technology is at the top of the solar tower. The sun’s rays captured by mirrors are bundled in our sunlight receiver. This allows us to reach over 1500 degrees Celsius. That is an absolute world record!” said Murer. “The second innovation is the thermochemical reactor, in which CO2 and water are converted into synthesis gas under the influence of this heat. And as a third component, we are developing a thermal storage system, because the sun doesn’t always shine. This way we can store some of the heat generated and use it to keep the reactor running at night or on cloudy days.”

In 2019, the entire process chain could be completed for the first time under real operating conditions on the roof of ETH. The parabolic mirror used had a diameter of four and a half meters, and in the end just 100 milliliters of fuel came out per day.

Can you go one size bigger?

“Our solar fuels are climate-friendly, our technology is globally scalable – theoretically, we could cover the world’s fuel demand several times over with our technology,” assured CEO Ambrosetti. But he knows, as does Murer: “It’s a long way from the laboratory to industrial implementation.”

With the planned plant, Synhelion is now concerned with demonstrating that the technology works on an industrial scale. The annual production at the airport showcase will be about 10,000 liters, so it should be just enough for a few long-haul flights. What makes the expansion of this promising technology so difficult?

“At the moment, it’s about scaling up our system,” said Murer. In other words, to gradually scale up technical components that already work on a small scale. “It takes time to develop these prototypes and test them in interaction,” explained Murer. “This has already been achieved, and to an even better extent than hoped. For example, we have already successfully tested the sunlight receiver on an industrial scale with an output of 250 kilowatts at the beginning of 2020. The plant on the roof of ETH Zurich operated at five kilowatts. This scaling step to industrial size was an important milestone.”

And “The construction of such plants is capital-intensive, which is one of the major challenges in scaling up,” said Dr. Ambrosetti. “Unlike with a software innovation, in this case, large technical installations have to be built.”

Whether the Synhelion product will be successful is also a question of price. “As close as possible to the price of fossil fuels” is therefore the target. “However, price competition is tough,” said the Synhelion CEO. “Because we are not currently paying the real price for fossil fuels – think of climate change and the environmental destruction caused by oil production.” “Not to mention, the tax exemption on aviation fuel in particular. But that is the reality we want to face,” said Murer. Dr. Ambrosetti is confident: “We have found solutions on how to increase efficiency and minimize production costs so that our synthetic fuels will be price competitive in the future.” And importantly for Murer: “Hydrogen, e-drives, of course, all have a raison d’être. We need many, many technologies to be able to accomplish this huge task of climate neutrality.”

In any case, one prominent figure is fully convinced of the potential of Synhelion‘s technology: Prof. Giorgio Mazzanti is involved with Synhelion as a strategic advisor. He is credited with the invention of polypropylene, the world’s second most widely used plastic. What is his motivation, what opportunities does he see?

“The technologies developed by Synhelion make it possible to achieve very high temperatures with renewable energy – specifically solar heat. Therefore, they can be used in all processes that require temperatures in this range. In my opinion, the main area of application will be the production of liquid fuels that can be used to decarbonize automobile or air transport. Another broad area of application could be the production of cement.” 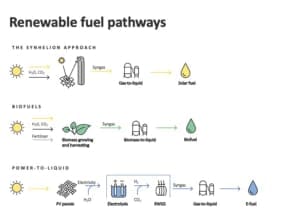 Therefore, great hopes are pinned on alternative technologies for the production of synthetic fuels. The aim is basically to produce a synthesis gas consisting mainly of carbon monoxide and hydrogen, which can be liquefied into various fuels in a further step. The decisive factor for sustainability and energy efficiency is how this gas is produced.

The power-to-liquid approach is being pursued by the Dresden-based company Sunfire  . The end product is called e-fuel, or electric fuel, and is created like this: with the aid of solar power, water and CO2 are processed by Co-electrolysis into synthesis gas and then into fuel.

Synhelion, in turn, uses the heat of the sun itself for thermochemical Syngas generation, thereby skipping a cost-incurring process step, electricity generation.

In both cases, the required water and CO2 ideally comes from the air. Among others, another ETH spin-off is working on this CO2 separation, Climeworks. As long as the process is still in development and thus its application is too expensive, the CO2 for the synthesis could come from cement plants, for example, whose carbon footprint is known to be huge.