Fair fashion is the sustainable alternative to fast fashion. But what exactly are the differences? SONNENALLEE asks a sustainable fashion influencer.

For years, production has been running at turbo speed. Fast fashion is the norm – a new collection every week, produced as quickly and as cheaply as possible. And consumers keep on buying until their closets are overflowing. But this has consequences.

At 4–5 million metric tons per year (8–10 percent of total global emissions), the textile sector generates higher CO2 emissions than all air and shipping traffic worldwide, consumes 79 million liters of water and is responsible for 20 percent of global water pollution and 35 percent of the microplastics in the oceans. How seriously are companies taking this, and what does it mean for our lifestyle? Should we buy fewer clothes, but ones that are more expensive and of higher quality? Livia van Heerde has some advice. She is 23 years old and an influencer for sustainable fashion. She also blogs about climate change, sustainability and veganism. She lives in Vienna and London, where she studied environmental sciences and climate change. 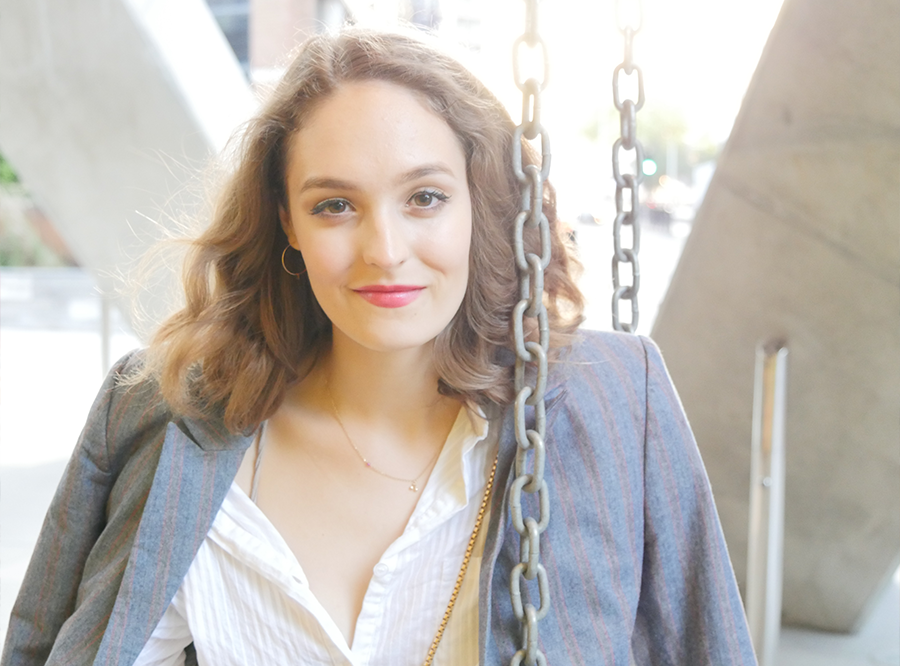 Everyone knows how bad fast fashion is, so why are people still buying it at all?
Livia van Heerde: Consumer behavior has changed considerably. Previous generations often wore clothes for decades. Then clothing became cheaper, so more could be tried out, by both designers and consumers. And now people are just used to it. They want it to stay that way, so that they can keep on trying things out and reinventing themselves stylistically more often. It’s difficult to change that.

The clothes are not designed to last as long either, right?
LvH: You’re right, at least when it comes to mass-produced goods. The quality is often bad, because only the cheap production and purchase price is taken into account. For example, a cheap dress today consists of only one piece of fabric. It used to be two or more. But that means more process steps and therefore a higher final price. The seams often don’t last for very long either, because everything has to be made super fast. Very little is repaired, because repairs often cost more than a new garment.

What about goods from smaller suppliers, who don’t mass-produce like the well-known fashion giants?
LvH: Small designers often try to be as sustainable as possible, because it’s trendy right now. The quality is also usually better, but then it isn’t cheap. Sustainability is already a luxury – you have to be able to afford it. Children’s clothing is a particularly tricky topic. Children grow, so they can’t keep on wearing things for twenty years. And for families earning an average income with multiple children, money is already tight. Second-hand fashion is a good and cheaper alternative here. Clothing exchange parties or platforms such as Vinted are great.

If you stroll through the pedestrian zones, you will always come across the usual fashion giants. Where can you find sustainable fashion?
LvH: Yes, visibility is unfortunately a problem with smaller sustainable providers. They can often only be found online to save on storage costs and rent. Therefore, they are unfortunately not so present in everyday life.

The big fashion companies now all have eco collections. Is this genuine or just a sham?
LvH: There’s no point in generally demonizing the big fashion companies, because they will always be around. It’s important, however, to remain critical and to say that it’s good that they are taking first steps, but it’s not enough. You often see more tricks from big companies. They advertise that they use organic cotton, but it’s not 100% organic cotton, only a percentage. Or they advertise that they use recycled polyester, and if you take a closer look, you realize that it’s just the label that is made of recycled material. And even if I recycle a plastic, it still remains a plastic, and that doesn’t change the fact that microfibers end up in waste water during washing – and, ultimately, in the sea. But the textile industry is also very complex. There are a lot of processes involved in every piece of clothing, so it’s not so easy to change.

What processes, for example?
LvH: It starts with the production of raw materials, such as cotton. The fiber is used to produce a fabric, and then it’s a matter of dyes, pre-treatment, post-treatment, disposal of dyes and other chemicals, etc.

But where there’s a will, there’s a way, as the saying goes…
LvH: It’s not as simple as that. Things have already changed a little, as consumers are increasingly demanding sustainable products. Of course, politicians must also play their part and create an appropriate legal framework. But quite apart from that, it’s almost impossible to produce enough organic cotton – for example – for these enormous quantities of textiles. Smaller manufacturers can be much more sustainable simply because they produce much less. The big fashion companies produce far too much. This leads to the fact that some unsold new goods are burned by the metric ton.

#ad | Today I visited the National Trust Promise Tree at Westfield Stratford to make a #PromiseForNature and help mark the the National Trust’s 125th anniversary. I signed my promise on a seeded paper leaf and hung it on the oak Promise Tree. I promised to help to combat climate change – I will swap driving for cycling or public transport on my way to work to help combat climate change & I promised to help keep the seas/rivers clean for wildlife and people – I will keep our waters clean by taking part in a river or beach clean, using a guppy in my clothes wash, and cleaning with natural products. It is Leap Day today so whether it is 20 seconds or 20 minutes, we can all try to make a promise and spend more time in nature today! #climateaction #climatechange #nationaltrust #london

So less is better than mass-produced organic products?
LvH: Exactly. It’s all about reducing consumption. If your closet is bursting at the seams despite sustainable production, then you haven’t achieved anything. Conscious consumption is the goal. I don’t want to be extreme and I don’t want to preach that people should refuse to consume, because that would also be unrealistic. But I want to create awareness about one’s own consumption, because that helps a lot. Everyone should inform themselves, talk to people and simply change a few things in their consumption behavior. It won’t hurt, and you will make an important contribution to environmental and climate protection.

Do you have any tips and suggestions?
LvH: As I said, just consume more consciously. You can ask yourself before every purchase, “Do I really need this right now?” You should ideally buy products made of natural fibers rather than synthetic ones, and buy second-hand clothes when you can, or swap them. Otherwise, wear your clothes as long as possible and repair them if necessary. All this helps reduce the excess quantities and thus also the mountains of waste, the consumption of resources and the emission of pollutants.

What seals and what brands can be trusted?

For consumers who value sustainable fashion, it is not at all easy to keep track. As with organic food, there is a whole range of seals for sustainable textiles that manufacturers use to advertise their products. But which of these can be trusted? And which fashion brands are actually sustainable?

Here are a few helpful links: