teamLab is creating something truly unique, using state-of-the-art digital technology to produce highly emotive art. The visionary aspect is that everything is born of a collaborative spirit. teamLab (founded in 2001) is an international art collective, an interdisciplinary group of various specialists such as artists, programmers, engineers, CG animators, mathematicians and architects whose collaborative practice seeks to navigate the confluence of art, science, technology and the natural world.

The aspiration to explore new relationships between people and the world through art, one of the main ideas behind teamLab’s art, is rooted in its genesis. teamLab was founded in 2001 by Toshiyuki Inoko and his friends to create a “laboratory in which to experiment with co-creation.” It seeks to enable new experiences through art and, through these experiences, to explore the relationship between the self and the world. The aim of these new experiences is to change people’s values and make the world a better place.

What was also there right from the start was the belief in the power of digital technology and in the primal power of creative collaboration. teamLab quickly became involved in numerous projects spanning diverse artistic genres. The collective grew – and is still growing – concurrently like a fungal network that is multiplying from itself and spreading across the entire world. Today, the collective has several hundred members who repeatedly join their artistic forces in changing project teams that depend on the type of project. The individual members are all experts from a range of areas.

„By experiencing that, you might think that everything in this world may be borderless, and that the world without boundaries is beautiful. By people experiencing the beauty of the borderless world, and by knowing that having no boundary is beautiful, their standard of beauty may get inspired. This still won’t solve tomorrow’s problems, but after ten or fifty years, we think people’s behavior may change unconsciously little by little due to their new standard of beauty. That is what we are hoping to do.“

Amazingly, it took until 2011 before the collective had its first major exhibition in the Kaikai Kiki Gallery in Taipei, Taiwan. It went on to exhibit at major contemporary exhibitions worldwide, such as the Singapore Biennale in 2013. Since 2014, teamLab’s works have been in the collection of the Pace Gallery in New York, and everything is now evolving rapidly. The art collective now has held exhibitions in Tokyo, New York, London, Paris, Singapore, Silicon Valley, Peking, Taipei and Melbourne, to name but a few.

What until then had manifested merely as fluid, temporary installations took on a more permanent shape from 2018 onwards – and on an unimagined scale. teamLab now has its own museums in places like Tokyo, Shanghai and Macau, which attract millions of visitors, and is planning to open more. 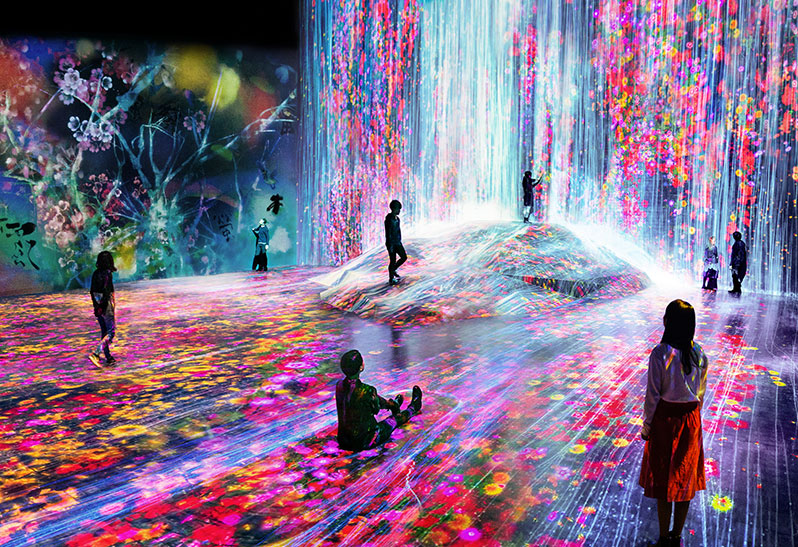 Just as teamLab’s magical light and projection experiences speak for themselves and are intuitive yet also work as hugely successful popular art, the philosophical superstructure is equally important to the collective’s self-conception. The basic premise of its art is to explore just what digital technology can do in an artistic context. In other words, digital technology no longer needs to rely on the materials to express itself, thus enabling an infinite number of new forms of expression. Over most of human history, creative expression has been conveyed through static media, often using physical substances like canvas and color. The emergence of digital technology is allowing human expression to break free of physical constraints and to exist independently of a physical construct. 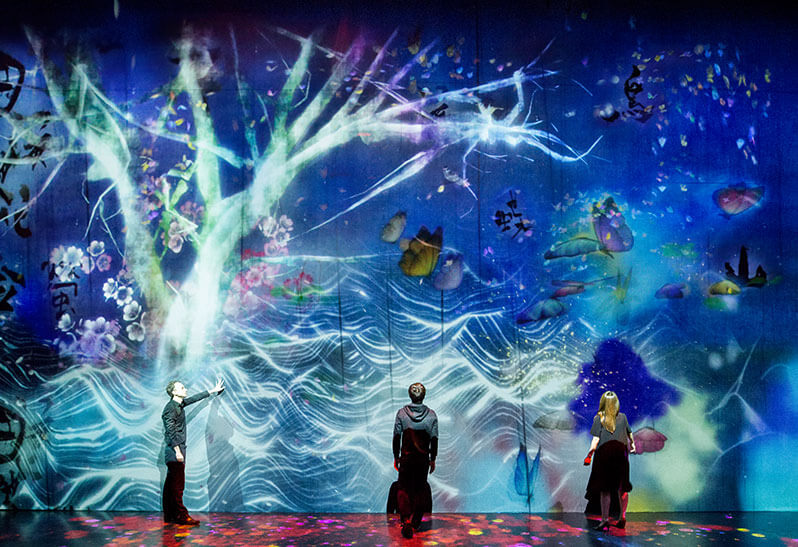 teamLab Borderless, Tokyo © teamLab
The artworks interact with the visitors and are continuously changing as a result. The subjects come, for example, from the world of flora and fauna or from the underwater world. The remarkable thing is that the museum is never the same if you visit it more than once.

The utopian element – transforming nature into art without harming it

A wonderful example of this is the annual digital exhibition of “teamLab: A Forest Where Gods Live” at Mifuneyama Rakuen Park, Takeo Hot Springs in Kyushu, Japan.

What can be regarded as the basic principle of teamLab’s art comes to life here. A utopian superelevation, a perception-enhancing experience and an intensified encounter with our present reality – using digital media alone. Through a confluence of different disciplines, the collective manages to create something new with its joint efforts, to generate an enhanced awareness of the flow of life. To look at natural elements like rocks, trees and bodies of water through a new lens. The fascinating thing is that teamLab does this directly where this continuous transformation takes place: in nature.

An important utopian element of teamLab’s art becomes apparent here: to capture the essence of nature using digital technology and transform it into art without manipulating and harming it.

The digital representation of nature, in this case the vast rock faces, caves, woods and gardens of the spiritual sanctuary Mifuneyama, encourages visitors to think about the significance of the continuity of life.

The presence of others as a positive experience

teamLab uses digital technology to create interactive art that treats people as part of the artwork and makes them part of something whole. A basic characteristic of interactive art is that the existence and behavior of the beholder can influence the art, thus blurring the boundaries between art and the observer. The artwork consists of both the art itself and the observer. This creates a shift in the relationship between the art and the observer, and between the individual observer and the group. Suddenly, certain factors become important – such as the question of whether there were visitors looking at the work five minutes ago, or what the visitor next to you is doing right now. This gives the art the ability to influence the relationships between the observers standing in front of it. And if the presence of another person has a positive effect on the art, it is possible for the presence of this person to be a positive experience in and of itself. The other is no longer regarded as a disturbance, but as an enrichment. 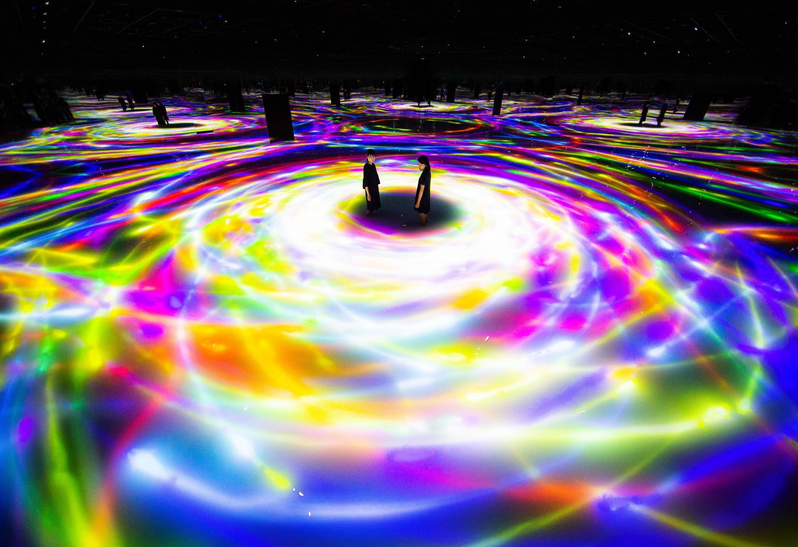 A feast for the senses: Visitors walk across real water right in the middle of the museum. There are digital koi swimming on the surface of the water, which seems to extend into eternity, and their movement is influenced by the presence of people and other koi. When the fish collide with people, they transform into flowers and disperse. The swimming patterns of the koi leave graphic trails on the water’s surface. The principle is that the artwork is being digitally produced in real time and is neither pre-recorded nor stuck in a loop. The fascinating thing is that the interaction between the observer and the installation is continuously changing the artwork. Visual conditions can never be replicated and will therefore never be the same twice. 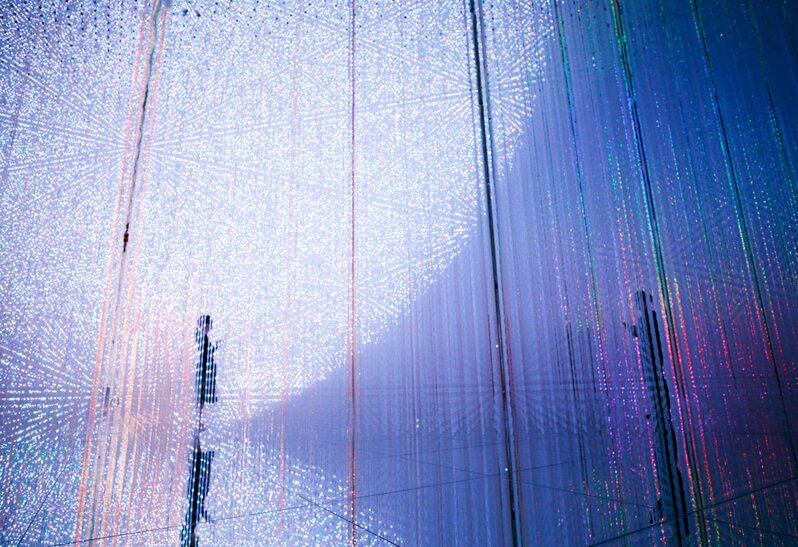 Utilizing the same technique as in pointillism, which uses the accumulation of dots of color to create a picture, points of light are used here to create three-dimensional objects. The interactive artwork “The Infinite Crystal Universe” depicts the universe through accumulated points of light, which extend infinitely in all directions. Visitors can use their smartphones to select elements of the universe and throw them into the infinite crystal universe. Each element that is released in turn affects the other elements, which are also influenced by the presence of people in the space. 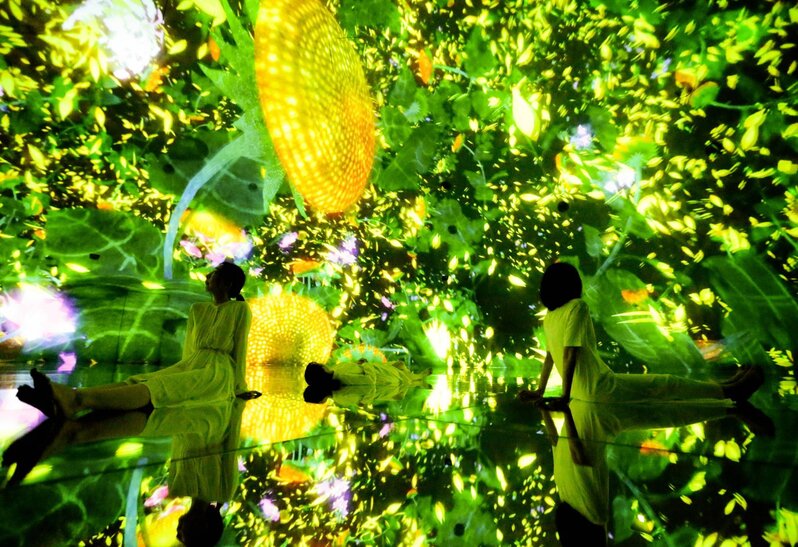 Floating in the Falling Universe of Flowers

A seasonal year of flowers that bloom and change with time, while life spreads out into the universe. Flowers grow, bud, bloom, and in time, the petals fall, and the flowers wither and die. The cycle of birth and death continues for perpetuity. The visitors, who can sit or lie down in the space, can completely surrender to this process and eventually their bodies will seem like they are floating and dissolving into the artwork world.

A colorful, light-hearted display with a relevant message for the world

Even though on a sensual level it all looks wonderfully playful, captivating and magical – which is what makes it easily consumable for all age and educational groups and explains its unbelievable popularity with the general public – teamLab’s art, as we have learned, doesn’t just have an aesthetic or commercial purpose. Based on the premise that there are no clear boundaries between people, teamLab would like to give people who view its art an experience in which the relationship between the world and the self is borderless and continuous. Everyone and everything is interlinked in some way – this is the message that teamLab’s artworks convey. This is not just a highly relevant message at this moment in time, but the way in which teamLab implements and conveys its ideas also makes it incredibly appealing and effective.

DAMN, THE END OF THE WORLD LOOKS AWESOME

The photo artist Tom Hegen dedicates his pictures to the topic of environmental destruction and draws attention to it with a special aesthetic.