The first digital currency produced from the sun’s energy is here. The concept behind SolarCoin is far superior to Bitcoin from an ethical perspective. While huge server farms continue to advance global warming with their vast energy consumption levels and their exhaust air in the process of creating cryptocoins such as Bitcoin and others, SolarCoins are generated through the operation of residential PV systems, i.e., by innovative people working to counteract global warming by generating alternative energies. This is a concept worthy of a Nobel Prize.

An idea in the experimental stages

SolarCoin is still a project in the test phase — at least this is how its two founders describe it. But looking at the current state of affairs would suggest that the project is well advanced. SolarCoins already exist in 73 countries, and PV system operators in these countries have already mined over 97 billion SolarCoins. To still be talking about it as an experiment at this stage suggests they are taking a very cautious approach.

The most important thing is that there is no risk whatsoever to the PV system operators because no investment is required. What they have is the opportunity to generate units of a blockchain-based cryptocurrency — SolarCoins — just by operating their own PV systems. These coins can then be transferred, traded and exchanged for material currencies worldwide. This is a form of added value that the operators can generate beyond mere power generation. Here’s how they do it:

The first requirement is to register. PV system operators register their entitlement to sign up to the solar currency at a SolarCoin branch. SMA’s Sunny Portal is the relevant authority for this in Germany. It takes care of all the bureaucratic formalities with the SolarCoin Foundation on the operators’ behalf. The registration process also involves verifying the registered PV system.

After registering successfully, the operators receive a SolarCoin wallet in which to store the solar currency. From this point on, they will receive exactly one SolarCoin for each megawatt-hour of power generated, which they can use just as they like.

As is the case with other cryptocurrencies, SolarCoins can also be sent to other wallets or saved up over time in paper wallets. They can also be exchanged for different national currencies via trading platforms. Platforms that trade in SolarCoins include Livecoin, CoinExchange, Graviex and Lykke Exchange.

To calculate the actual production quantity, which forms the basis for SolarCoin credits, data points need to be transferred a few times a year to verify the amount of power produced. There are already a number of leading platforms worldwide that perform SolarCoin verification today. You can find out more detailed information at the relevant SolarCoin branch.

PV system operators have the option of receiving harvested SolarCoins via automated data import. This requires the submission of paper documents via an online interface or through the relevant SolarCoin branch. There is a second option, but the SCF states that this is available only to operators of larger PV systems starting at 500 kilowatts.

Is the concept catching on?

The success of the SolarCoin experiment hinges on how the idea is catching on in the public eye. This relies not only on the PV system operators, but also on the participation of the general public. When the first cryptocurrency was launched you could buy two margherita pizzas for 10,000 Bitcoins, whereas one Bitcoin is now worth around €9,000. If SolarCoin establishes itself as an internationally recognized cryptocurrency, PV system operators stand to make considerable additional profits in their homes — without any added expenses whatsoever.

Whether SolarCoin catches on also depends, not least, on how many global companies accept it as a means of payment. Solar companies could take the first step here by providing goods and services in exchange for SolarCoins at the current market price. That would be the initial spark that could help the environmental cryptocurrency make a breakthrough. SMA is already looking into ideas like this. 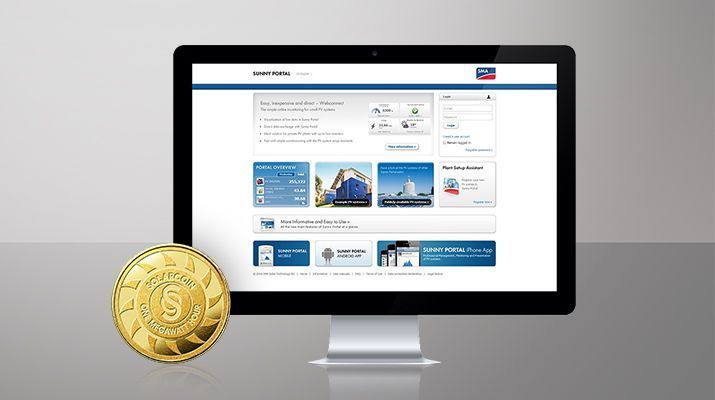 SolarCoin is a currency spent on energy generation that can be used by all solar power producers worldwide as an additional incentive. Sunny Portal users can easily register their system to receive SolarCoins.

The drive of the founders

SolarCoin is not about earning money — at least it shouldn’t be. The SolarCoin Foundation’s mission is to accelerate the establishment of renewable energies focusing on solar energy. The mission has a 40-year scope.

If operators are wanting to embody the spirit of the founders, all they need to do is to collect the coins, without expecting billions in profits. “SolarCoin is like frequent flyer miles for solar power producers all around the world,” said Joseph Zitoli, describing the concept. To avoid having to wait any longer for government grants for the solar industry, they are hoping that this will become a form of start-up support for the global switch to renewable energy sources.

Sunny Portal — the home of SolarCoin in Germany: www.sunnyportal.com

For operators of PV systems with a nominal power of up to 150 kWp, Sunny Portal is a full service provider, including for the purchase of SolarCoins. SMA makes it especially easy for registered users on the platform to obtain the promising cryptocoins.

This doesn’t just involve providing the aforementioned support for registering with the SolarCoin Foundation. Sunny Portal also offers complete infrastructure for purchasing coins for ongoing power production. “By activating their accounts, over 260,000 PV system owners and operators worldwide can click and receive SolarCoins as an extra reward for the solar energy they have produced,” explained Nick Gogerty, co-founder of SolarCoin. “They can claim SolarCoins for energy produced since January 2010 and for the next 35 years going forward.”

From then on, the SolarCoin Foundation will update account balances based on registered production data several times a year. This does not require a wallet as the account balance is managed directly through the SCF. Only if the coins are to be redeemed for use is a wallet required so that the coins can be stored on people’s computers.

The price is right

The SolarCoin exchange rate is currently around USD 0.01. This roughly equates to the issue price. When the price shot up temporarily to USD 2.40 in January 2018, this was proof that there is more behind the currency. While it may have been primarily a parallel effect of the Bitcoin euphoria at the time, it showed very clearly that SolarCoin is to be taken seriously as a cryptocurrency that responds to market influences and expresses them in price movements. This is a good start to the mission to achieve a completely solar-powered planet.