When we hear the words “solar energy,” most of us probably instantly picture PV systems. However, solar technology is every bit as rich in variety as its potential applications, something that Marjan van Aubel skillfully demonstrates in her solar designs. Her mission is no less than to revolutionize the way people look at solar energy. SONNENALLEE interviewed solar designer Marjan van Aubel – she talks about aesthetics, sustainability and her dream of designing an entire city.

“What kind of future will we, as designers, create?” is the enthusiastic response from Marjan van Aubel when being asked what solar design actually means. It’s about designing the future based on renewable energy, she adds. What approach do you take for your design process? “It all begins with a question, and as I work toward an answer, a goal gradually starts to form. However, flexibility is also important here, because sometimes I might find an answer somewhere completely unexpected.” Van Aubel sits in a large, minimalist, high-ceilinged room. This roof, would surely have enough space to accommodate a PV system. We talk briefly about solar panels and quickly agree that they are about as far removed from any concept of aesthetics as it’s possible to get. That’s just the way standard PV systems are. So what does a solar designer do with these rather ugly electronic panels? “As a designer, I noticed just how embedded solar technology already is in our lives, but I couldn’t help thinking that there was room for improvement. I was inspired by a whole range of technology from Germany and Switzerland. I‘d seen these blue panels before and remember thinking there was so much potential for improving their design. I was keen to explore all this design potential – and, in turn, transform the narrative of solar energy.

Solar energy so far appears to be the most effective weapon in the fight against climate change, which is why it’s essential to see it in a new light. After all, solar energy is more than just precisely positioned geometric panels adorning roofs and streetlights. To transform this narrative, van Aubel creates astonishing solar power concepts designed for interiors. It all started at the Royal College of London, where she studied design. It was in her final-year that she first combined solar technology with design. She is motivated not only by her fascination with photons and how they convert energy, but also – and above all – by the possibilities this offers for society. She talks about a “solar democracy,” though not, as she is quick to point out, in a political sense. The sun itself is extremely democratic – after all, it’s always there and, above all, always available to everyone. This notion inspired me to make solar energy available in places that everyone can access and where it can be utilized directly.”

For the solar designer, it’s essential that the energy from the sun can be utilized to the full. With creations like the Current Table and Current Window, she demonstrates how it’s possible to still generate and utilize solar power in living spaces where there are no PV systems. Another model that she designed for interiors is the Sunne lamp, which is operated entirely by solar energy. What makes this model particularly special is that it imitates the light during sunrise and sunset, simultaneously lending solar technology an intuitive aspect. 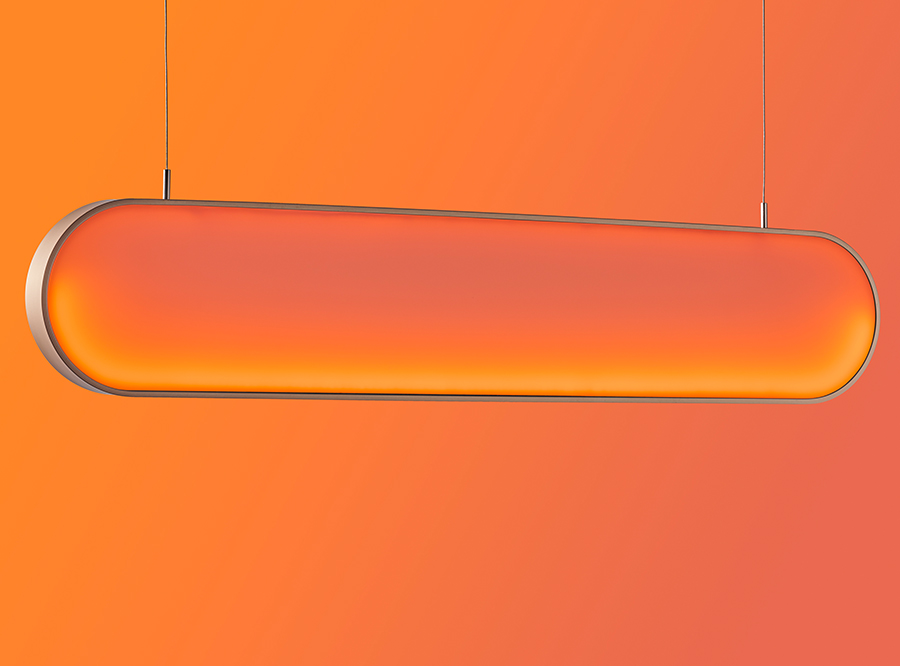 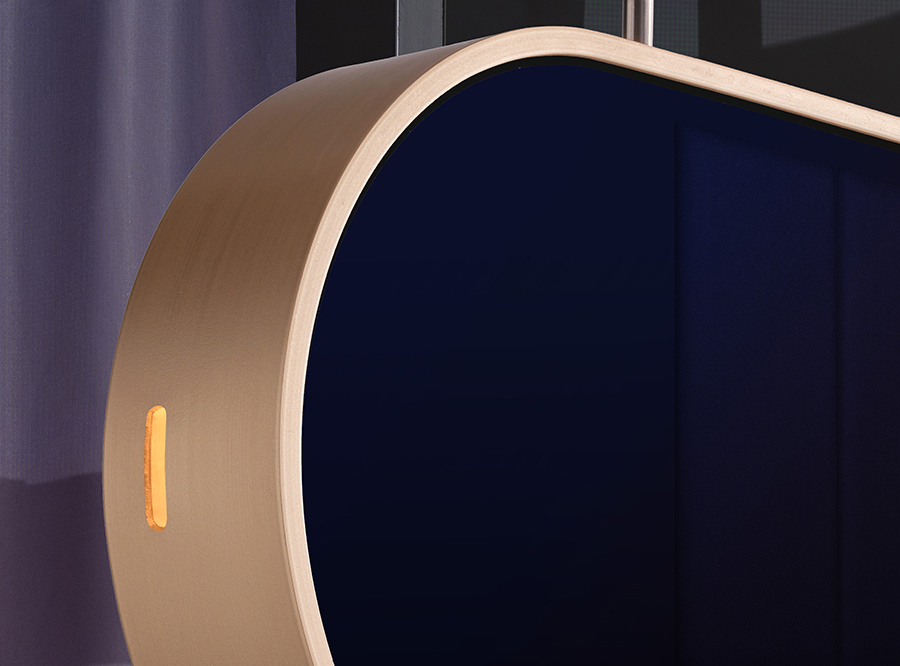 “Solar technology has to be seen as a whole.”

The biggest challenge that Marjan van Aubel always faces during the creative process is to actually turn new concepts into reality. The solar industry is, after all, very much geared toward big industry, which means that the development process in small-scale projects aimed at creating something new from solar energy can proceed only bit by bit. And this is where prototypes come in. “You start with something that’s actually designed for mass production and try to reconfigure it for a whole new concept. That can be pretty difficult sometimes.”
The ambitious designer may enjoy some creative freedom here, but, depending on the producer, she can express this only to a limited extent. While she often enjoys the freedom to design the panels and printed solar cells, the extent to which she can let her creativity fly is constrained by the technology. However, she doesn’t let this hold her back.

“We’re not talking about solar technology, but about solar design and solar architecture.”

Of course, solar energy isn’t the only form of renewable energy, but Marjan van Aubel is fascinated by the relationship between the sun and humanity and the accessibility of solar energy and, above all, “the chemical processes that occur in these materials and convert photons to electrons – and all that just on the surface of the materials. It’s just so beautiful.” The designer is currently working with organic photovoltaics (OPV), which are solar cells that consist of a hydrocarbon compound and feature a special electron structure (the π electron system), turning them into amorphous semiconductors. Using this technology, the designer is currently working with manufacturers who produce printed solar cells that have a monocrystalline structure and are semitransparent. They can be easily attached to buildings and supplied with an electric current.

Another of van Aubel’s creations is the Power Plant, an autonomous greenhouse that creates its own supply cycle through evaporation and with the help of solar cells. The plants are exposed to different light spectra from the integrated LEDs, stimulating growth. She will be showcasing the concept of a self-sustaining habitat within the living space on a larger scale at Expo 2020 in Dubai. The theme of Expo 2020 is sustainability and the Dutch pavilion will be ‘uniting water, energy and food’, a biotope in the desert. The solar designer is always thinking about the Europe of tomorrow – after all, the EU has pledged to achieve carbon-neutrality by 2040. Do you think this is a realistic goal? “A lot needs to be done before European cities can be truly carbon-neutral. I hope that we don’t act too hastily or shortsightedly in endeavoring to achieve this goal simply by installing the same old solar panels everywhere. I want us to go a little further into the future and think about how we want our towns and cities to look. This approach is relevant right now in the decision-making process. If we don’t do this, we’ll be taking too shortsighted an approach simply in an effort to achieve our goals.“ What’s important is the ongoing enhancement and refinement of solar technology, trends that van Aubel is monitoring closely and expressing in some very special designs. 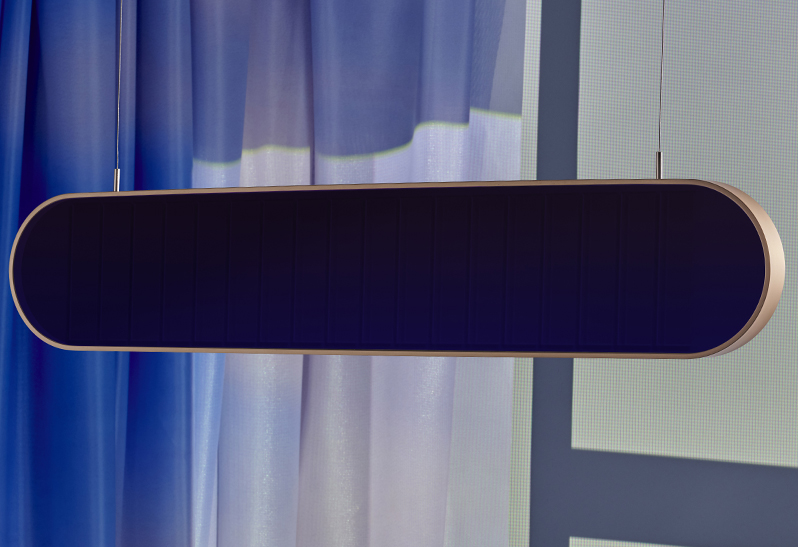 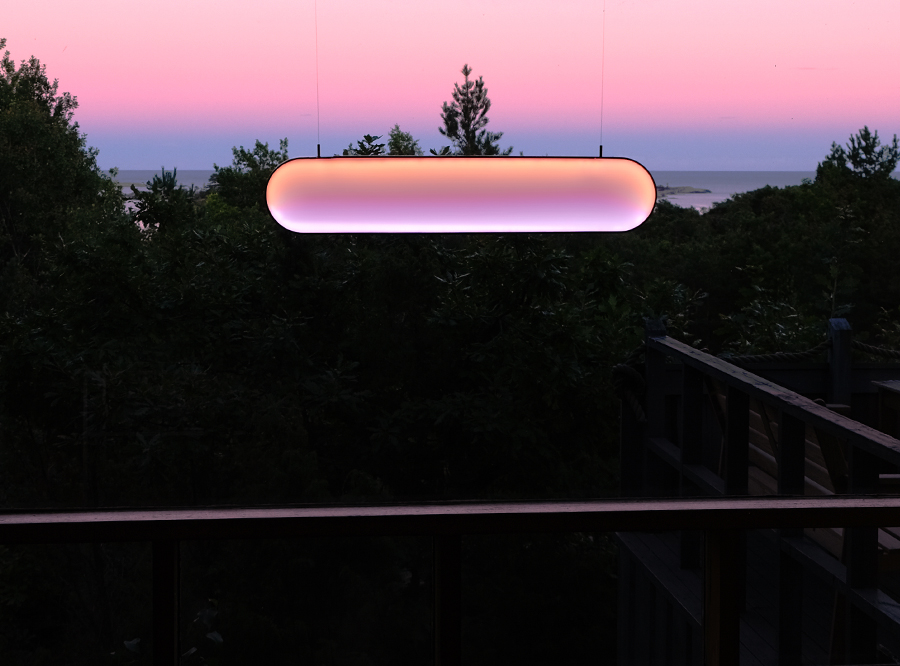 What happens when solar panels become part of the problem, not the solution?

Most solar panels have a service life of around 40 to 50 years, so we can expect to see a glut of electrical waste over the coming years. Most industrial countries do have a well-developed recycling infrastructure, but if the solar panels are discarded without due care and attention, they would be turning into environmental sinners, not saviors. “The good thing about the latest generation of solar panels is that they take this into account and are easier to recycle because the individual components can be more easily separated from each other. The lifecycle of solar panels should be more circular, and I know that a lot of research is being conducted into this.” With these technological foundations in place and through the movement that she has initiated, van Aubel is confident that more architects and designers will focus on this technology in the future. The designer takes a holistic view of solar technology and has widened this approach to encompass all manner of materials and aspects of our daily lives. In one of her projects, she wants to integrate solar cells into fabrics. Van Aubel is currently collaborating with fashion designer Pauline van Dongen to turn this idea into a reality. These “solar fabrics” could be used to create clothes that are also capable of charging your cellphone.

The designer is keen for people to equate solar energy with more than just PV systems: “It’s about taking an all-encompassing perspective on solar energy.” To achieve this, she’s always looking at different aspects, and she’s well aware that solar energy alone cannot cover all our energy needs. Van Aubel sees additional potential in combining solar energy with biogas, wind turbines and hydrogen. It is the interaction of all these possibilities that characterizes the works of the Dutch designer and turns true innovation into something tangible right now. Van Aubel’s mission is to place solar energy in its overall context and so ensure that it becomes ever further integrated into our daily lives. “We’re seeing a shift away from solar technology toward solar design, and I think this is something that’s happening worldwide.”
To complete this shift, solar energy needs to be understood in its full extent so that it can be embedded in our daily lives wherever possible. After all, “good design should not only be valued and comfortable, but also generate energy,” says the solar designer.
The next stage in the world of renewable energies will become apparent as soon as you no longer have to think about how to generate energy, just how to use it. “What would it mean for us if we had unlimited supplies of energy? How would we grow our food? You would see a completely different mindset. I don’t want to focus solely on the aesthetic aspect of design; I’m mainly interested in designing something whole – for example, a house or maybe one day an entire city. That would be my dream project.”
Solar design means not simply looking at a single aspect of solar power, but seeing it as a holistic system. It doesn’t matter whether it’s the facade, window, table or even your own clothing that is supplying the power. It’s about rethinking our understanding of solar technology and better comprehending its far-reaching potential.