The Austrian Alpine Club has spent millions renovating its aging mountain huts in preparation for a rush of tourists. In the highly sensitive Alpine ecosystem, sustainability in projects like these is both a must and a special challenge. A prime example of how this can be achieved is the revamped Seethalerhütte on the Hoher Dachstein. The operators called on German expertise to help install the energy supply for this popular hiking destination.

Refuges like the Seethalerhütte are vital to the safety of the ever-increasing number of recreational and professional mountaineers. They not only offer protection against the often extreme weather conditions in mountainous regions, but are cozy places for hikers to while away the time and rest their weary feet before continuing their ascent or descent. They also act as bases for mountain rescue teams. Most visitors to the new Seethalerhütte, which is located close to the Swiss and Italian borders and sits precariously among deep crevasses and sheer drops, will likely have little idea of its history or of the design and engineering feats accomplished in its construction.

As you approach the Seethalerhütte, which lies at an altitude of almost 3,000 meters (above the Adriatic), via the Johann climbing route, you’ll be amazed at its futuristic design – a design that bears little resemblance to our traditional idea of a mountain hut. A gabled roof and geraniums? Think again. Instead of weathered timber, you are confronted with a facade constructed from dark metal panels embellishing a sharply angular structure that, according to the architects, was designed to resemble the Dachstein massif itself, with a precipitous south wall meeting a gently sloping, northward-facing roof.

This new mountain refuge has been favorably compared to a mountain crystal, while the less enthusiastic have said that it looks as if a UFO has landed in the Alps. But whether you think it resembles a mountain crystal or UFO, one thing’s for sure: The technological and engineering facts and figures behind this structure are nothing short of amazing.

State-of-the-art technology means that the building is completely fossil-fuel-free. This is achieved thanks to the combination of a PV power plant and CHP plant, which ensures that the refuge now has a completely self-sufficient energy supply.

The original Seethalerhütte was already several decades old when the Austrian Alpine Club decided in 2016 to launch an architectural competition to replace the old, dilapidated building with a new construction fit for future generations.

The hut, which was originally known as the Dachsteinwartehütte when it was built in 1929, had been renovated many times by the turn of the century. But no amount of renovation work over the years could solve its most basic problem: its location. The very foundations on which the building was literally constructed were at risk of slipping into a crevice due to the declining permafrost. This made planning and construction work all the more challenging. Not only did geological surveys have to be conducted, but, in addition to all the construction requirements, the Austrian Alpine Club committed itself to ensuring that the new building complies with all requirements regarding nature conservation, the environment, mountaineering, tourism and safety. 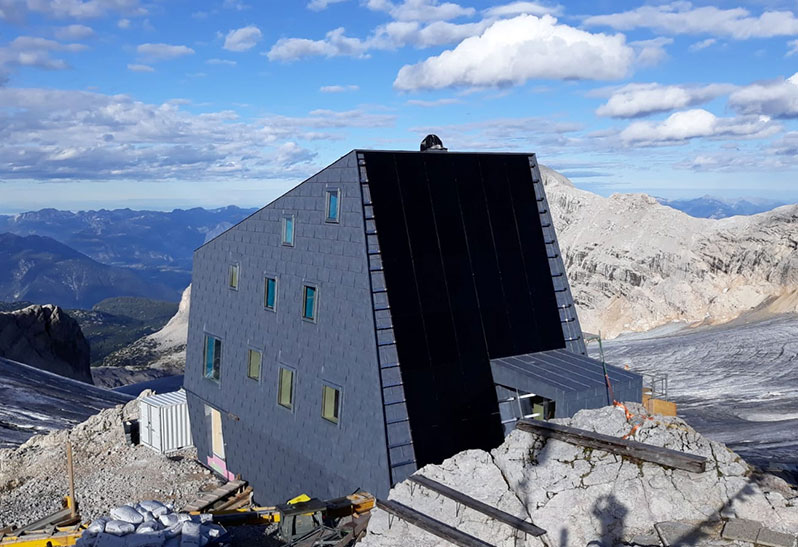 Fossil fuels can be completely dispensed with at the Seethaler Huette 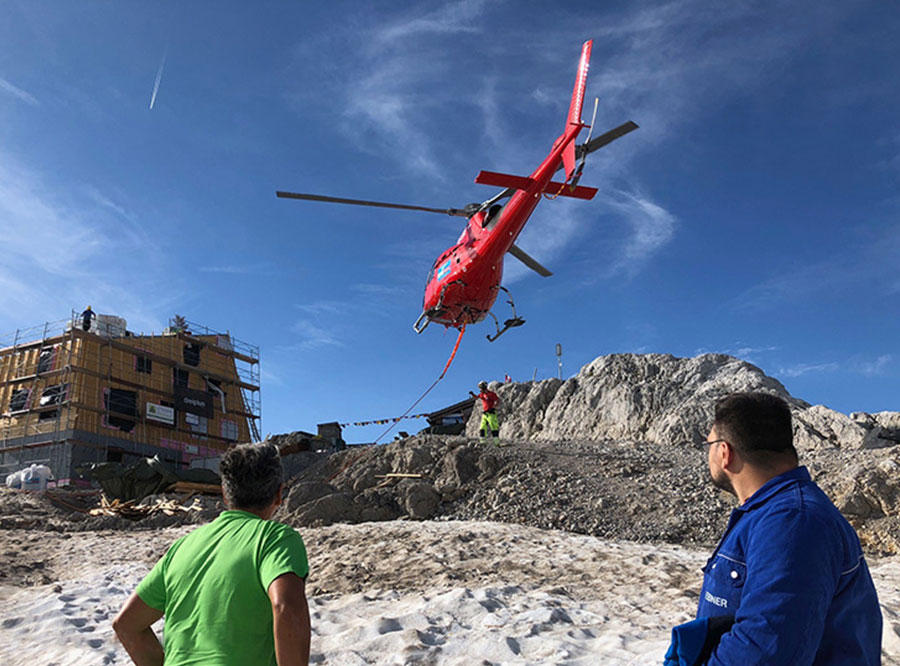 One proposal instantly caught the eye of the jury. The plans submitted by the architects from dreiplus in Innsbruck offered, in the jury’s opinion, a number of decisive benefits, including the fact that it combined a very small development footprint with a facade-integrated PV system and a drinking water treatment facility. These are the perfect solutions for ensuring the self-sufficiency of the building, something that used to be possible only thanks to a diesel generator.

As a result, the latest incarnation of the Seethalerhütte is completely fossil-fuel-free. A PV system complete with a battery storage system and rapeseed-oil-based CHP plant now generate all the power the building needs, saving on the roughly 1,200 liters of diesel that the old building consumed every season. The PV system supplies around 60% of the electrical energy, with the remaining 40% provided by the CHP plant.

Any energy surplus is stored in batteries and made available whenever needed. And German expertise played a key role here. Since the Seethalerhütte is not connected to the utility grid, battery inverters from the Kassel-based manufacturer SMA Solar Technology are responsible for grid management. They together constitute the stand-alone grid and automatically ensure that the necessary amount of energy is available at all times.

In light of these accomplishments, it’s no wonder that the Austrian Alpine Club describes this project as a “technological lighthouse project.” But it came with a high price tag. The building, which was constructed over the course of two summers, cost around €2 million. Half of this sum was financed by the Austria Section of the Austrian Alpine Club and a good third by the main association. That said, the State of Upper Austria contributed €200,000, with the remaining €70,000 or so coming from a fundraising project.

The importance of this investment and the new Seethalerhütte next to the old refuge became all too apparent just last summer when work on dismantling the old hut uncovered three sinkholes – including a roughly 30-meter-deep crevice. The Krone newspaper in Styria ran this story under the headline “Disaster on the Dachstein Narrowly Averted.”