Sustainably generating electricity and feeding it into the grid is one of the key challenges of the energy transition – after all, wind and solar power are unfortunately not always available at constant levels. One possible solution to compensate for fluctuations in the utility grids is bidirectional charging, a concept whereby electric vehicles can not only draw power from the utility grid for charging but also feed it back in as needed. In this way, hundreds, thousands or even millions of electric cars could become “energy storage units on wheels,” balancing out fluctuations in the energy system. They could power toasters, illuminate schools and provide light and sound at cinemas.

UTRECHT – CITY OF THE FUTURE

The Dutch city of Utrecht is one step ahead of the present. Three years ago, the world’s largest bicycle parking garage offering space for up to 12,500 bicycles across three floors was opened at the main train station. In early 2022, the German discounter Aldi Nord opened its first fully automated store in Utrecht, where customers could shop with the support of artificial intelligence and without the need for a wallet. In the summer of 2022, the city – which is home to more than 360,000 people – was transformed into a real-world laboratory for e-mobility and bidirectional charging. Together with the municipality of Utrecht, car manufacturer Hyundai and mobility service provider We Drive Solar have launched a project that will make Utrecht the first region in the world with a bidirectional energy ecosystem. Tests are now underway throughout the city to see how bidirectional charging can work in practice and on a large scale. 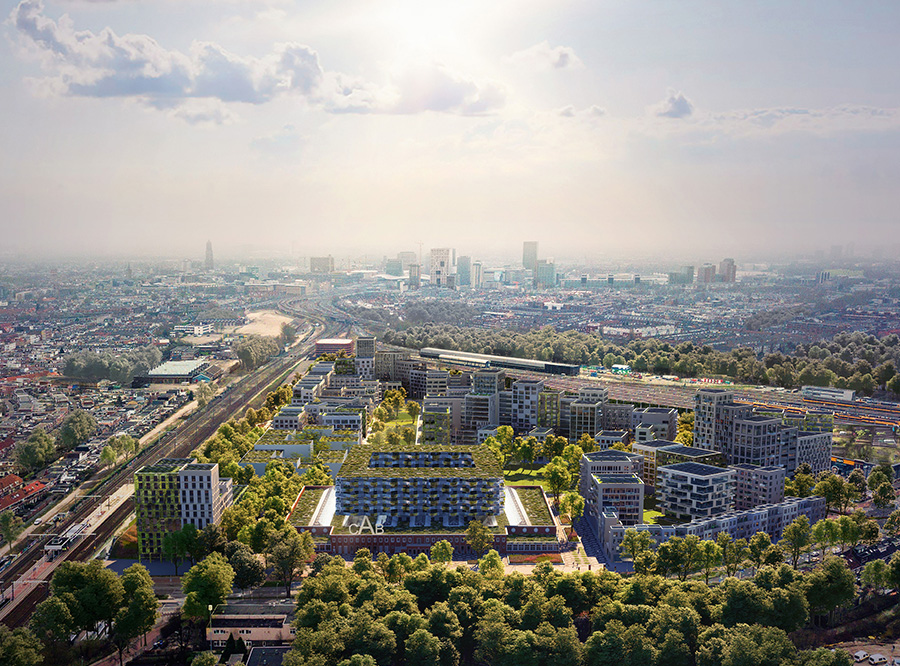 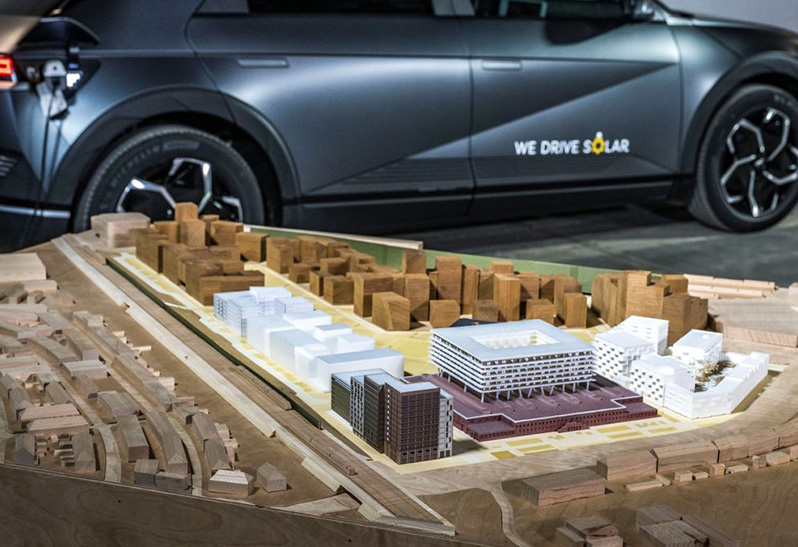 At the heart of the bidirectional charging project is the new Cartesius urban district, which is currently under construction near Utrecht main station. The 13-hectare site, where trains used to be switched and repaired, is being transformed into a sustainable urban neighborhood with more than 2,500 houses and apartments. Developers MRP and Ballast Nedam Development have been guided by the concept of “Blue Zones,” a term used to describe regions around the world where people live longer, healthier lives. Okinawa in Japan and Sardinia in Italy are among them, as are the Seventh-day Adventists in Loma Linda, California (U.S.). People who live in Blue Zones live longer, often to over 100, and are less likely to suffer from cancer. The new Cartesius district was developed in keeping with Blue Zone concepts such as mobility, healthy nutrition and community. The focal point is the historic CAB building, which was constructed in 1949 and was where buses used to be repaired. This is set to become the new district’s community space, housing a food hall, eco-supermarket and workplaces for people in the creative industries. A central park and public kitchen gardens where residents can grow their own vegetables will be created around the CAB and the residential buildings. Sustainability was also a key focal point in the planning of the residential buildings. Whether social housing or townhouses, all the buildings – including the greenery on their facades and the solar systems on their roofs – are designed to be energy-neutral. The Mecanoo architects have even thought of nesting places for birds.

And what about traffic? Although the entire neighborhood is car-free, there is still plenty of space for sustainable mobility – and not just for pedestrians and cyclists. In Cartesius, there may be no beach under the cobblestones but there is an underground parking garage directly under the green space. According to the planners, this will accommodate mainly car-sharing vehicles used by the residents. At the end of April 2022, the first IONIQ 5 models featuring bidirectional charging capability from Korean manufacturer Hyundai were unveiled to the public at the CAB. The fleet is expected to grow to 150 vehicles later this year. All vehicles are designed for “vehicle to grid” – that is, they feed the electricity stored in the battery back into the utility grid. Yukihiro Maeda, Head of Cross-Carline (Hyundai Motor Europe), is enthralled by the idea that the car of the future will no longer merely draw energy from the grid but become an integral part of the grid. “Energy from renewable sources depends on whether the sun is shining or the wind is blowing. It is becoming increasingly important that we can store energy and use it later when needed. During the day, the vehicle will charge its battery with energy from the utility grid. This energy can then be used in the evening or at night to balance the utility grid when demand fluctuates. In the morning, intelligent software means that the driver can enjoy their fully charged vehicle.” 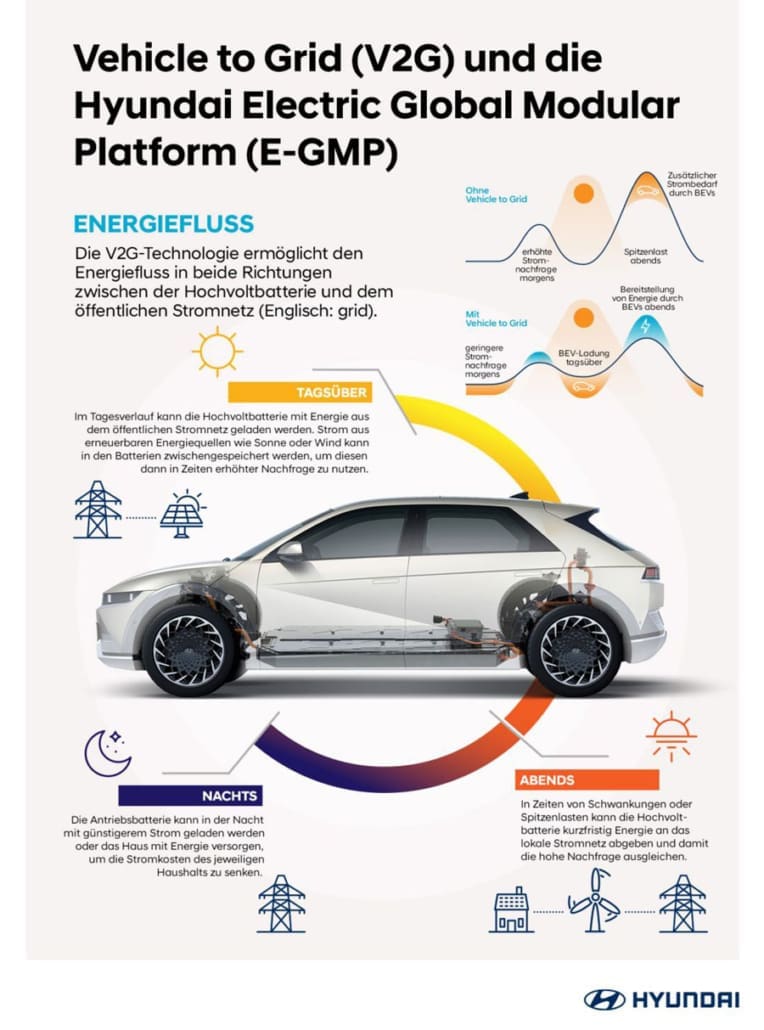 For Daniele Vacca, the Charging Performance/Interoperability expert at the Hyundai Motor Europe Technical Center, the possibilities of the new technology are far from exhausted: “In the future, every city, every person, every household can be harmonized. Thanks to an algorithm that monitors energy production and energy demand, any renewable energy solutions installed to harness solar power will turn every household into a ‘mini’ energy producer. People will understand that not every car needs to be fully charged at all times. Since the system will be capable of accessing the different energy sources and synchronizing distribution, the overall local energy demand will decrease. Production and consumption will be controlled. The energy produced by your house could be used to light a school or run a cinema. The potential is limitless.” 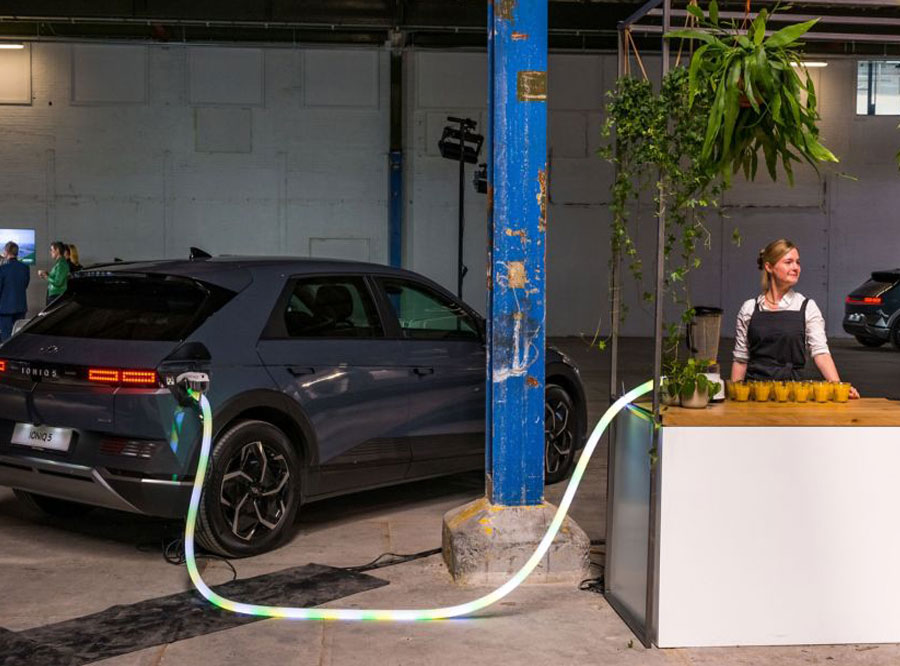 Hyundai/We Drive Solar
The car could even power your juicer.

How does bidirectional charging work?

What can bidirectional charging be used for?

What technical requirements are necessary?

Bidirectional charging is especially useful when a vehicle is parked for a long time during the day and thus can stay connected to a charging station. So far, AC charging stations up to 22 kW – like the SMA EV Charger  – have been the most common solution. There are currently only a few providers of expensive DC solutions with this power on the market. Of course, the electricity could also be converted within the vehicle. This is not possible with the international charging standard CCS (Combined Charging System) and is supported only by the CHAdeMo (Charge de Move) charging interface developed in Japan. In addition, the automotive industry in Europe and the U.S. has yet to develop a uniform standard for in-vehicle bidirectional communication interfaces. This could change once the uniform communication standard ISO 15118-20 is introduced.

What other hurdles still need to be overcome?

In Germany in particular, there is still no technical or regulatory framework in place allowing bidirectional charging to be introduced quickly and on a large scale. Should the goal of 10 million electric vehicles as recommended by the “Future of Mobility” national platform ever actually be reached, the utility grids will be confronted with whole new levels of stress. Safe, grid-friendly charging and discharging cannot yet be guaranteed, and the relevant control, measurement and safety mechanisms are lacking.

In this article, Lisa Spangenberg, charging technology expert at SMA, provides further information on bidirectional charging and explains why it’s already more cost-effective to drive an electric vehicle than a traditional gasoline-powered vehicle.

Cornelia and Volker Quaschning in interview

E-Mobility in the Coronavirus Era