The term geoengineering is a red flag to many people. But without geoengineering – i.e. the deliberate and purposeful large-scale intervention in the climate system of the earth – it may well no longer be possible to save the climate. What options do we have and who is making sure that nothing goes wrong in the process?

It really is enough to make you tear your hair out. We had plenty of time to achieve the Paris climate targets. Even as recently as 2018, the Fraunhofer Institute for Energy Economics and Energy System Technology came to the conclusion that Germany can still achieve its climate protection goal in its “Energy Scenario 2020” study. Everything would have been doable. Instead, electric utility company RWE is currently blithely expanding open-cast mining operations once more. The MCC in Berlin estimates in a policy brief that we have five years left based on current global CO2 emissions. After that, according to the MCC, the global CO2 budget – with which the set goal of limiting global warming to a maximum of 1.5°C is still achievable – will be completely exhausted, if we continue at the current level. However, there is a preference for taking out “carbon mortgages” rather than making reductions.

Can we ever repay those carbon debts? No. Well, at least not while we continue to hold on to a system of economics and values based on constant growth. Well, unless… Yes, unless we find ways and means that enable us to actively remove greenhouse gases (GHGs) from the atmosphere. It is indeed possible to bring about negative emissions, but the impact of the current methods ranges from insufficient to potentially catastrophic. The MCC refers to negative emissions as an “uncertain means of paying off carbon debt,” because each of the approaches put forward up to now contains a huge “but.” Yet, there may not be a way around geoengineering, which is why the field urgently requires extensive research.

There are many different ideas for how negative emissions might be achieved. Some of them are very simple, while others represent major technological challenges. All of them mean considerable extra expenditure, however.

Afforestation and reforestation
Growing trees is relatively inexpensive and does remove CO2 from the atmosphere. However, afforestation takes up large areas, which puts it in conflict with food cultivation. In addition, huge amounts of water are needed to ensure that the saplings flourish. On top of that, researchers discovered that afforestation is not really effective at all, because while the trees may actually grow faster due to the already high CO2 content in the air, they will also die significantly earlier. Thus, greenhouse gas cannot be captured in sufficient quantities or for a sufficiently long time.

Biochar
Partially burnt biomass is added to the soil. This improves the ability of the soil to absorb CO2. However, not enough research has yet been carried out on the extent to which the soil would have to be supplemented and the impact this would have on soil life. In 2016, Germany’s Federal Environment Agency published a study on biochar that provides first insights on the amount of research that will actually be required.

Bioenergy with carbon capture and storage (BECCS)
Plants convert CO2 into biomass that is then burnt, thereby supplying energy. The CO2 released during burning is captured and injected into the earth for permanent storage there. However, that uses up enormous amounts of land, the costs are very high and the people living in the affected areas refuse to accept huge amounts of greenhouse gas being pumped into the ground near their homes.

Enhanced weathering
Weathering is a term that describes the natural decomposition of rock. When it rains, certain rock minerals are dissolved in the rainwater, the resulting solution draws carbon dioxide from the atmosphere. Thus, it would be possible to add crushed minerals to the soil to chemically capture CO2 from the atmosphere. However, this method does not supply any energy; it only consumes it. And, as with biochar, there is insufficient research in this area. 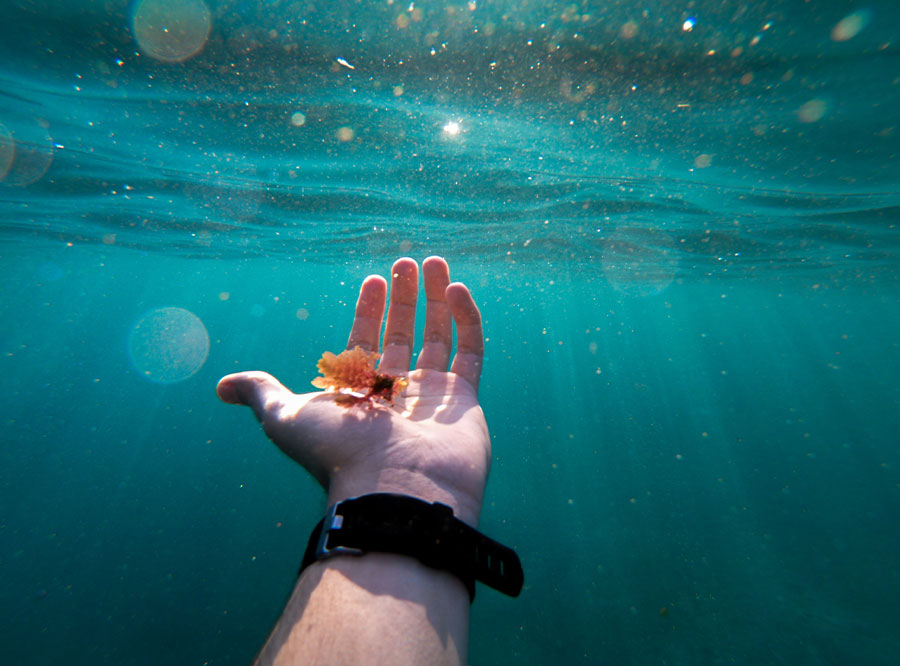 Power of algae: To stimulate the growth of algae, iron or other nutrients are added to the ocean, because the more algae there are, the more CO2 they can absorb.

Ocean fertilization
Iron or other nutrients are added to the ocean to foster algae growth. The theory is simple: the more algae there are in the ocean, the more CO2 they can absorb. When they eventually die off, they will sink to the ocean floor, taking all the captured CO2 with them. In theory, that is. In practice, the effectiveness of this method is disputed.

Air filtering (DAC)
CO2 is extracted from the ambient air through chemical processes and stored in the ground. In theory, this would indeed allow a large amount of CO2 to be removed from the atmosphere. However, on the needed scale, this method would require one third of the current global energy supply.

The Centre for Climate Repair (CCR) at Cambridge University is also dedicated to conducting research into methods for reducing GHG emissions and negative emissions. However, with its third research focus, the CCR goes one crucial step further. It also evaluates options for climate repair. The key questions here are which new technologies could be used to return critical elements of the climate system to an undamaged condition and what are the legal, economic, political and ethical ramifications of this?

For example, efforts are being made to refreeze the poles. To this end, uncrewed ships in the polar seas could spray seawater mist into the clouds. As a result, the clouds would be enriched with tiny particles of salt, resulting in them becoming more widespread and reflecting more sunlight, thus bringing about cooler temperatures below the veil of clouds.

Another option for solar radiation management would be to introduce sulfur dioxide across the entire stratosphere, which would also form reflective particles. Even positioning mirrors in space is now being considered in order to reflect solar radiation and thus lower surface temperatures on earth.

We have to examine all options

The CCR emphasizes that the situation has now become so serious that approaches to saving the climate that were previously considered too time-consuming, too expensive or too risky also have to be considered. The global climate is connected to all kinds of ecosystems. The earth as a biosphere is such a highly complex system that, to this day, science has not been able to fully understand its correlations – and perhaps it never will. The methods that are intended to rescue us from climate catastrophe entail invasive interventions in this system on a massive scale. We can, at best, venture a vague guess as to the scope of the consequences of these interventions. This makes institutions such as the CCR and the MCC all the more important. They try to shine a light on all aspects of geoengineering methods from a scientific and ethical perspective in order to provide a bigger picture that is as clear and as comprehensive as possible. Only in this way can rational decisions be made. Only in this way can we keep ourselves from accidentally speeding up the impending apocalypse by making rash last-minute decisions.