Let’s imagine the year 2035. The world is a wonderful place with unlimited sustainable mobility. The word “gridlock” has been consigned to old newspapers with pages fading as time goes by. Every day, millions of people are happily commuting in electric air taxis to inner cities, where they use a variety of convenient means to reach their individual destinations – including car sharing, e-scooters and ride hailing. It is beautiful, this mobility of the future that our transport ministers have in mind: modern, exciting, clean, convenient – and, unfortunately, utter nonsense. At least, Tim Holthaus says so. He is a goods transport planning and transport logistics researcher at the University of Wuppertal, and is looking into what we can do to genuinely spare our cities from total traffic gridlock. His solution for the mobility of the future is more Neanderthal than Star Trek.

Mr. Holthaus, from a researcher’s perspective, looking at our congested inner cities, is it really so hard for you to imagine gliding around in an air taxi?

Tim Holthaus: I don’t envisage any new modes of transport. These air taxis that have been highly publicized in the media in recent years are neither sustainable nor viable as a future means of mass transportation. Although electric-powered systems may sound like a sustainable and eco-friendly solution, we shouldn’t forget that energy as a concept is taken from the environment and, as such, energy generation will always have an impact on our environment. Freeing ourselves from energy requirements would be a huge undertaking.

And how about e-scooters? They’re very popular right now in nearly all major cities in the world, but are also a topic of heated debate.

TH: E-scooters are a great means of transport for some situations. However, I don’t anticipate that an e-scooter sharing system will help in any way make transport more sustainable. What I expect to happen instead is that people will walk and cycle less.

Does this mean that the future of mobility is cycling and walking? Humans have been traveling on foot for over three million years – it’s not exactly innovative, is it?

TH: The whole idea of personal mobility is based on walking, with cycling as a good alternative for short distances. In my eyes, public transport is still the best solution if we’re looking for sustainable and environmentally friendly options for mass mobility. It’s a great way of combining individual journeys, and in good transport systems – like in Berlin, for example, – there are no drawbacks for users in terms of flexibility: services are frequent, the route network is extensive and there is barely any wait.

“I would wish for politicians and planners to tackle some of the problems we are facing right now instead of talking about air taxis, autonomous driving and e-scooters.”

But that’s a solution that already exists for big cities like Berlin. Or do you foresee a time in the future when all places — even tiny villages — will have a bus schedule with services every five minutes? Would it not be sensible to supplement the public transport network with private-sector services?

TH: For me, there’s no doubt that we need to give public transport a boost in all regions of Germany and also safeguard this social system against economic competition. I would not like to see a situation where, after the demise of public transport, only financially well-off people can afford to take an Uber because Uber sees the best way of maximizing profits as “generating high revenues” rather than “being accessible to a large number of passengers.”

Going forward, we should also look at practical ways of integrating sharing systems into the public transport network. In areas that currently have very poor public transport connections and where access to conventional transport systems is either impossible or very difficult, services could be improved through car or bike sharing. However, the service would need to be location-specific and custom-adapted in this instance too.

Your research focuses on goods transport planning and transport logistics. Since the boom in online shopping, it feels as though one in three vehicles in the city has been a delivery van. What ideas do you have to address this issue?

TH: Like with public transport, the key to efficiency is combining services. Communities need to create conditions where the use of zero-emission vehicles is enforced at local level, where it can have an impact on air pollution control and make the city a more attractive place to be. In an ideal scenario, people would receive a delivery from a parcel service provider once a day, but in reality it is more like multiple times a day. The upshot of this is having different parcel service providers out on the roads throughout the day.

If recipients had the option of selecting their parcel service provider, they would try to organize everything through the same provider. This would mean they wouldn’t have to take delivery of multiple parcels. Since there are lots of people placing orders in your street, this would not necessarily change the number of delivery vehicles in your area because your neighbor may have opted for a different parcel service provider.

This is where there is considerable potential for making savings. If parcel service providers were to work together, they could cut costs themselves because there would be just one vehicle delivering to your street. However, competition between service providers rules out the likelihood of this kind of cooperation, even though it would have the greatest benefits from an economic perspective. 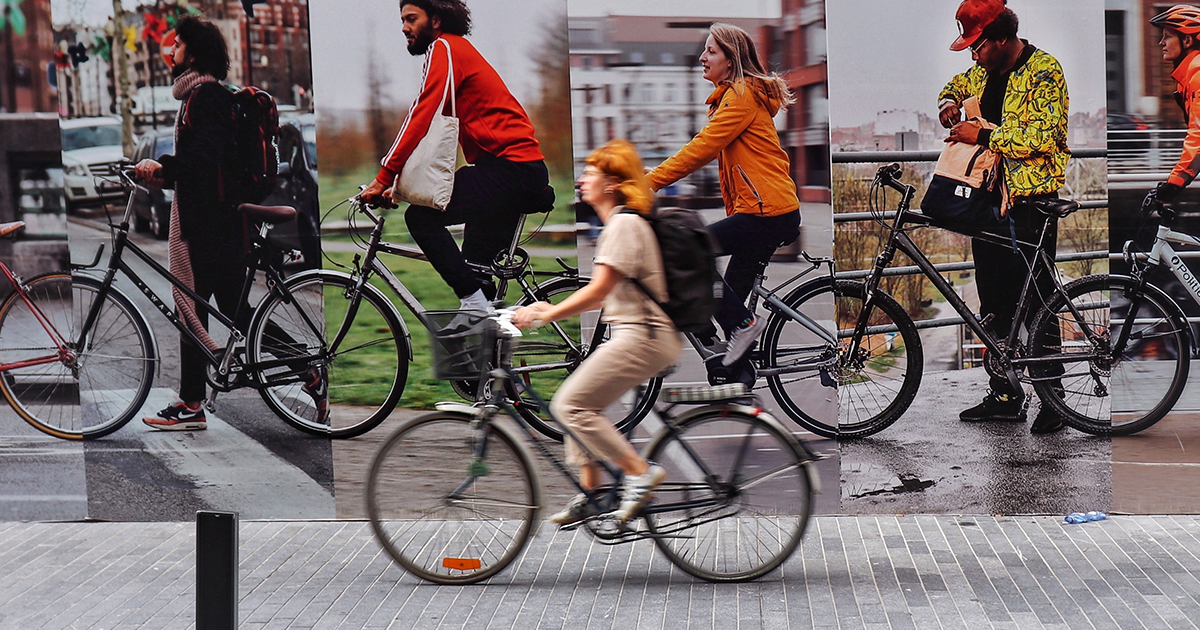 In the city of the future only bicycles will be used? Probably not! Our expert Tim Holthaus is pretty sure about that.

In the interests of climate protection, should we as consumers thus forgo the convenience of having products delivered right to our doorsteps? Should we actually start GOING shopping again? This would mean using our feet again.

TH: It’s a question of how we want to shape our future and what our idea of convenience is. Online retail has led to a widespread impression that goods are becoming increasingly affordable with faster deliveries, which is resulting in greater demands on logistics.

Overall, we are seeing a rise in delivery frequencies and expected opening times for inner cities to accommodate delivery services.

Online shopping is not bad per se. But we need to stop to consider whether we could purchase the same item in store as well. This is often the case, particularly in the clothing segment. Online shopping results in a loss of sales for local stores, which ultimately puts them at risk of closure and can lead to a reduction in the range of products that can be obtained in local stores.

To conclude, let’s play fairy godmother: If you could wish for a mobility concept to become a reality overnight, what would it be?

TH: I would wish for politicians and planners to tackle some of the problems we are facing right now instead of talking about air taxis, autonomous driving and e-scooters. I’m not saying that we should prohibit or forget about these forms of mobility; just that we should get our priorities right.

Specifically, we should focus on upgrading our regional road network and avoid building new roads. At the same time, we should invest more in our railway infrastructure. We should also conduct a critical review of tax benefits for long-distance air travel.

There should be greater incentives for using bicycles in regions and cities, and cycling in combination with public transport should be promoted as an alternative to using cars. The proposal for amendments to the German Road Traffic Act is introducing a great many “tools” that will support a shift in our transport system.

Generally speaking, there should be a reduction in motorized transport in inner-city areas as this increases quality of life along with the appeal of shopping locally.

Thank you very much for your insight, Mr. Holthaus.